Day 3
With two bucks down that meant we still had six more left.  We all left the ranch house around an hour before daylight and went our separate ways.  With the ranch not having much of a road system, all of us usually had pretty good hikes into our glassing spots.  All of our teams were still seeing plenty of deer and rutting activity was still going strong.

Ira and myself had headed north from the ranch house to hunt the southern end of the biggest mountain on the ranch.  We were seeing lots of does and little bucks but nothing worth chasing.  As midday started to approach we made the decision to move around the mountain while the deer were bedded down.  While we were walking I looked off to the south and noticed something moving.  Ira and I both pulled up our binos and watched some Javelina feed out into some rocks.  With it being midday we decided we were going to have a long range contest on this group of pigs.  We both laid our packs down as I ranged them at 450 yards.  Ira let the first shot rip and I couldn't tell where he had hit.  The pigs started to head back where they came from as he shot again and barely missed.  I was just starting to get back up as Ira whistled at me.  I looked over at him to see a buck and two does that had just got up not 50 yards underneath us.  We both swung on the buck and Ira couldn't pick him up in his scope due to being on 14 power on his scope.  Somehow I got lucky and found the buck in my scope (I was still on 25 power) as he hit an opening I let my .300 WSM rip. We heard the whack as the buck slowed down a little and hit another good opening and Ira let one go from his .270 WSM.  We both had a bullet in the buck as he went just out of sight.  We made our way over to where the buck was and found the blood trail which turned out to be a short one to a great buck.  The buck had split eye guards on both sides and matching extra points on the end of each beam. 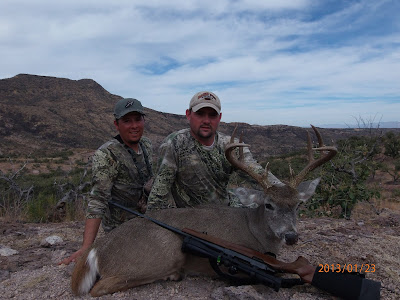 Day 4
Ira and I headed to the top of the highest peak you can see in the background in the picture above to see if we could find Ira a buck.  As we were cussing ourselves the whole way up the mountain, thinking what are we doing?  Neither one of us knew what was in store for us on the other side.  As we were getting set up to glass we heard a doe start blowing below us.  A buck came chasing her down the mountain.  We were scrambling to get a good look at him.  If he wasn't broke off on one side, he would have been a shooter.  The one horned buck ended up getting a great afternoon going for us.  Not long after, we spotted another upper 90's buck traveling by.  We watched him move down into a wash and get some does up.  We continued glassing and as I looked down to check on the buck and his does, there was now a giant  (120") pushing the upper 90's buck off.  Ira began to get setup as I watched the buck.  After an unfortunate miss on a tough shot we had a long walk out in the dark.  We still had two more days to locate the big buck and were optimistic about our chances....stay tuned for days 5 & 6. 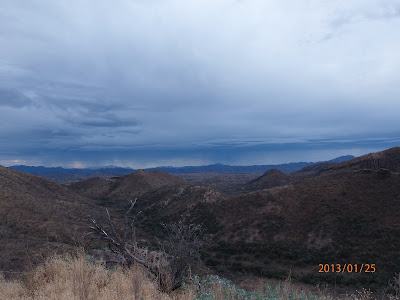 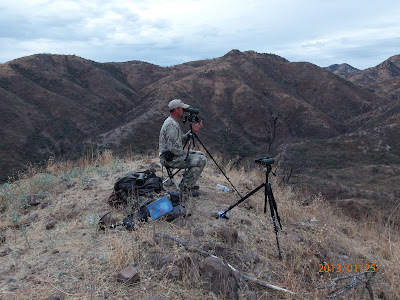 Posted by Devin Hancock at 6:51 PM