I also had the privilege of hunting with Farrel Holyoak of Overgaard during the 3A/3C general deer hunt.  Farrel had booked a mule deer hunt in northern Utah and ended up missing the first day and a half of the AZ season.  He got home just in time to load up and head out for the evening hunt of day two.  Despite our efforts, we only saw a little buck that night.

The next morning we moved locations and slowly worked a little ridge, glassing some burned out bottoms.  Within minutes, we located a heavy, wide buck directly below us.  I told Farrel that it was a nice buck, but only a 3 point.  I told him that I thought we could do better.  He adamantly insisted that he was a big buck and that we should kill him.  After a few minutes of debate, I told Farrel that it's his tag and that the decision was his.  "BOOM!!!"  Farrel put his 270 WSM to work and put down the buck. 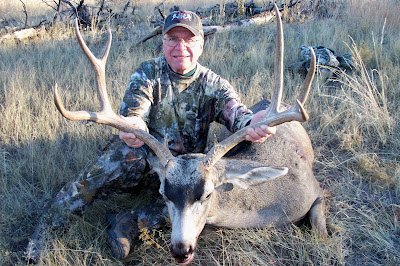 Congrats to Farrel on his Buck 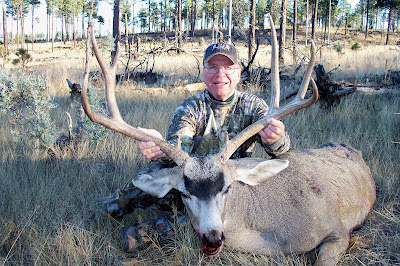 This year I had the opportunity of hunting with Bill Davis of Tennessee.  Like most non-residents, Bill had been applying for the AZ strip over the last 9 years.  Upon realizing his 0% chance of drawing a strip tag without max points, Bill took the advice of some research articles and applied for 3A-3C general mule deer.  Bill drew his tag and called BTO for help.

Bill arrived two days before the start of his hunt and spent some time scouting with me.  On the morning before the opener, we saw a buck that I had scouted and named "Jowls" because of his double chin.  Bill looked over the 4x6 buck and moved him to the top of his list.  Opening morning was cold and windy and deer movement was minimal.  Around 10am, Jowels and some friends made an appearance and the stalk was on.  By the time we got into shooting position, the bucks had bedded.  Jowls was bedded in a jack pine thicket with a small shooting lane to his vitals.  Just before noon, Bill made a perfect 225 yard shot and his 1st mule deer was down.  Congrats to Bill on a great buck.  He'll look good hanging next to his whitetails. 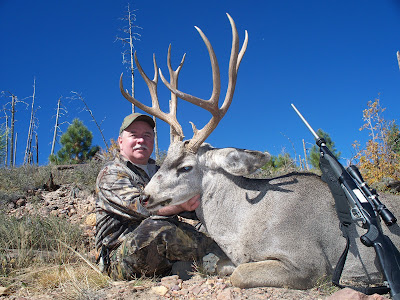 Bill with his Arizona Mule Deer 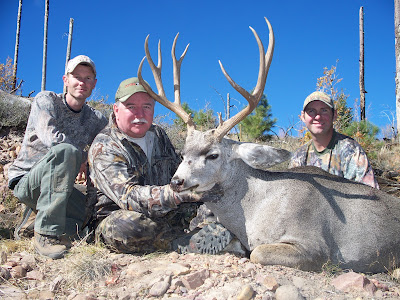 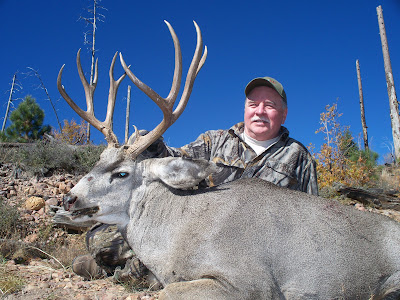 Now you see why I named him Jowls!
As a side note: Jowls had a tear under his tongue that was allowing food/cud to pack in between his tongue and jaw bones causing the bulge under his jaw.﻿
﻿
Posted by Daniel Franco at 6:41 PM No comments:

This year I was able to take my younger brother on his deer hunt.  My dad (Mike), Daniel, Dane, and Myself had spent many days scouting for Dane and our clients and had come up with quite the hit list of bucks.  The unit was looking more promising than the past two seasons with more deer and more mature bucks.  Dane and myself were looking for two bucks in particular, The wide heavy four and a narrow tall four point that we had seen for the past three seasons while hunting elk but had eluded us during the past deer seasons.

I drove up Thursday night and headed into where the two bucks lived to glass.  I ended up not seeing any deer but saw around 100 head of elk.  Opening morning came and Dane and I were headed out to drive in to start still hunting down through some burned cuts.  We were sitting in the truck talking about our game plan and waiting for it to get light enough to start walking up the ridge we were going to work down.  Grey light finally approached and we were getting our stuff together to take off up the hill.  We had made it 50 yards from the truck when two bedded bucks stood up out of a stand of jack pines at 175 yards catching both of us off guard.  We were still getting stuff situated and hadn't had a chance to get the shooting sticks ready.  I told Dane to get ready as I threw up my binos to see what the bucks were.  The buck in the front was our "Wide Heavy Buck" I thought would be 185-190 range.  Both of the bucks were still in the velvet which was odd for the time of year.  I told Dane to get on him as he was moving away up the hill with the other buck.  I ranged him at 215 yards and told him to take him if he could, as he was having to shoot offhand.  As Dane's 300 win mag rang out I watched as the big buck kept moving up the hill and the second buck hit the ground.  He had walked in front of the big buck at the wrong time and took the bullet intended for his buddy.  We made our way up the hill to find that Dane had caught the buck right at the base of the pedicle and shot a horn off.  The hunt ended up lasting about two minutes total after leaving the truck.   Although it was short it was nice spending time with my brother in the woods doing what both of us love to do.  Congrats to Dane on a nice buck and thanks for letting me be a part of the hunt.

Posted by Devin Hancock at 8:46 PM No comments: