It's pretty easy to get wrapped up into the whole size/numbers game when it comes to hunting.  I know I've done it.  It's especially hard when you're in the guiding business.  But here's a little story that really put things into perspective, at least for me.

Last year, I met a 12 year old boy from Clarkston, Washington by the name of Spencer Clegg.  He had drawn an early rifle bull tag in unit 4B and traveled to Arizona to hunt with his Dad, Matt, and good friend Matt Toniolli.  They hunted hard and chased some good bulls.  With time winding down, they decided to contact us in hopes of some help.  With only a day and a half left in the hunt, we met in Heber at 3:30pm and headed out for the evening hunt.  While driving to our desired hunting area, we drove up on two bulls that were watering at a tank near the road.

We ditched the truck and circled around the tank to get the wind and try to get into position.  Within minutes we were on the backside of the tank and had two 150 yard shooting lanes despite the thick cedar trees.  Suddenly a heavy 6x7 bull walked through the trees heading away from the tank.  We could also see the smaller bull still watering at the tank.  I turned to Matt (Dad) and explained that the 6x7 that walked off was a good bull and that I believed we could get on him in the clearing he was walking towards.  Or we could wait out the 5 point that was watering and that he would walk thru our shooting lanes when leaving the tank.  Here is where "perspective" comes in.

Being the good Dad that he is, Matt turned to his 12 year old son and asked Spencer what he wanted to do.  Go after the big bull in hopes of getting on him again, or wait for the smaller bull to exit the tank???  Spencer's response was simple and direct.  "I just want to shoot a bull, Dad!"

Within minutes the 5 point finished drinking and walked into view.  Spencer made a perfect 135 yard shot and dropped the bull with one shot from his 270.  I will never forget the celebration that erupted once the dust cleared.  I don't know that I've ever seen a more excited 12 year old.  It's moments like this that we love the most about hunting with youth.

Congratulations to Spencer on his first bull elk.  And Congrats to Matt Clegg for allowing his son to make the decision that I wouldn't have made.  But I'm glad he did!! 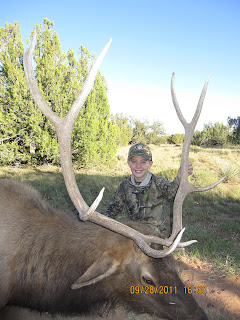 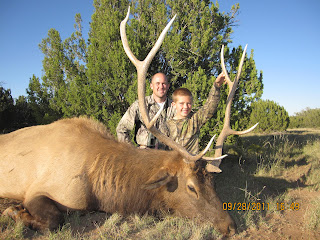 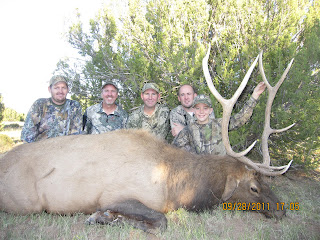 ﻿
Spencer Porter, Rusty Ulmer, Me, and the Cleggs