This year I had the privilege of hunting with Dave McNeill of Clarksville, TN.  Dave drew a 3A-3C archery bull tag after 11 years of applying.  We had some awesome encounters that neither one of us will ever forget.  The first occurred on opening morning with a big, 6x6 at 12 yards.  Later that evening, we had another great bull moaning and screaming at only 18 yards.

On the evening of day 8, Dave was able to get an arrow in his Arizona trophy.  Click on the link at the bottom of this post to watch Dave's hunt that was featured on Cabela's Out West. 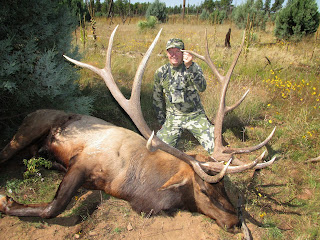 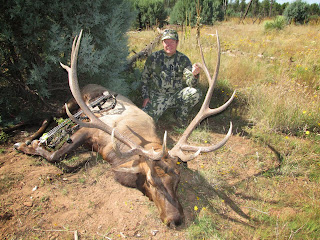 
Posted by Daniel Franco at 9:25 PM No comments:

This year my little brother Dane was fortunate enough to draw a coveted unit 1 archery bull tag.  With my dad having a client, I was the one to get to hunt with Dane.  We began our scouting trips over the July 4th weekend and made many more leading up to hunt.  The horn growth was looking good as we had seen many good bulls.  The weeks of summer flew by and before we knew it it was the night before the opener.  Opening morning was relatively slow as we had pressure from other hunters and the bulls had all but shut down in the area we were hunting.  We finally caught a break on Sunday morning and evening as we had two of the bulls on our hit list almost within shooting distance.  Monday morning found us moving to the west looking for where the bulls had been pressured to.  We bedded some bulls and decided to be back in that evening.  As we were sneaking into the green trees a bull let out a bugle.  We hustled to get the wind a little more in our favor and get set up.  I cow called once as the bull let out a scream and was already on top of us at 50 yards.  Dane elected to pass on this 340 type bull.  We continued through the green trees listening for bugles and glassing.  As we got to a good looking bottom another bull bugled down the ridge.  We crossed the canyon and were waiting for the bull to bugle again.  As we were waiting we see a spike headed our way.  With the night being so slow we decided to see how close we could cow call him into.  The spike came by looking for us at around 20 yards and got behind us.  We stood up and began working in the direction of the last bugle when the spike came running by us headed back to where he came from.  We worked forward and now could see him with another spike.  I caught some movement off towards the bottom as a bull stood up out of his bed to readjust.  I could tell that he was a shooter bull and we began to get a plan of attack together.  The bull was bedded in a set of young aspen trees and was alone.  We began to stalk in on the bull and before we knew it it was raining and we were now at 38 yards.  Dane drew as I was going to cow call to get the bull to stand up and fully expose his vitals.  I had never seen a bull do what he did, as I cow called he laid his head sideways all the way on the ground as if he was hiding.  Dane let off and we just looked at each other.  About a minute later the bull picked his head up and began to stand up.  Dane drew back and released just as the bull took a step hitting him a little back.  The bull began to try to take off as i began to cow call to stop him.  The bull stopped as I ranged him at 42 yards and Dane made the second shot count, putting it through both lungs.  The bull ran 40 yards and piled up.  We began to celebrate as we knew the bull was better than we initially thought.  We started wading our way through the 7-8 foot tall aspens to the bull.  The bull continued to grow as we got closer.  The bull had a big inline and mass to spare.  It took until 130 AM to get the bull back to camp, we were all anxious to see what the bull would score.  We gross scored Dane's bull at 383 and change.  Not too bad for his first archery bull.  Congrats again Dane, I enjoyed our time spent together as brothers.

Posted by Devin Hancock at 9:02 AM No comments: