Sticks and Strings and Bugling Bulls

These three great AZ bulls were killed in 3A/3C by Larry Friedman of CA, Shane Hunt of AZ, and Ben Tenney of AZ.  The first two bulls scored over 360" which is quite an accomplishment with a stick and string.  Ben's bull was not far behind at a score of 350".  Archery elk hunting is by far our most anticipated hunts of the entire year. We all wait for that magical month that the bulls are bugling, the trees turn colors, and we get to travel the woods with family and friends.  Thanks guys for letting us be part of your hunts.

Here are a few more bulls that were harvested with us over the last few years.  Chester Crandell, my father-in-law, was lucky enough to draw a muzzleloader tag with only 3 bonus points.  After missing the bull of his dreams, he was able to take this great 360" bull at only 18 yards.  Last year BTO had the opportunity to hunt with Butch Herman of AZ on his 4B early rifle bull hunt.  Butch made two amazing shots to put down this 357" beauty on opening morning.  Our good friend, Damon Hughes, was also fortunate to take a good bull with us last year in 23 North.  Damon smoked this bull at 40 yards on the second evening of the hunt.  Damon's bull scores 346" as is and should break 360" if not broke.  Congrats to all the guys and their great trophies.
More bulls to come........

Posted by Daniel Franco at 7:01 PM No comments:

My passion for antelope hunting has really grown over the past two years.  I was lucky enough to draw tags the last two seasons (one rifle/one archery).  My dad and I had a combined 35 days of scouting before my rifle tag and were able to spend a lot of time together.  We were able to harvest the 85" buck opening day after some competition, four stalks and a 300 yard shot from my 300 WSM.

In 2011 I was drawn for the archery hunt in the same unit.  After 12 days of scouting and countless practice shots at long range I had an area picked out to hunt.  Opening morning I was able to stalk up to within 45 yards of two good bucks and 21 does and just couldn't close the deal.  At around 11 A.M. I was on my third stalk on the same group of antelope and this time the buck walked out at 88 yards.  I drew back, settled in and released.  The buck ran fifty yards and piled up.  In my opinion it is one of the hardest animals to spot and stalk with a bow.


Posted by Devin Hancock at 5:00 PM No comments:

We killed both of these bulls in the same area not 100 yards apart, on different years, just off the back side of the Mogollon Rim.  Check out Ed Houston's great 3C bull that scored 380".  He has 24" G-2's and a hooked left main beam.  Just a few years earlier in the exact same spot we had killed Devin a great early bull that scored just over 370".  Not to long until the AZ draw results will be out!  Good luck to everyone.

Posted by Mike Hancock at 3:58 PM No comments:

With the AZ Elk/Antelope draw results quickly approaching I thought I would post some archery bulls we have harvested in the last couple of years.  Check out good friends Travis Kohlrus of KS and Jeff Neubauer of CO with Travis' AZ bull killed last year.  The third picture is of a great bull that seldom bugled and that we chased for most of the season before Chase Sherwood of NM killed the monster 387" archery bull.  Thanks for the fun boys....

Posted by Mike Hancock at 8:47 PM No comments:

This year I got serious about killing a Coues with my bow.  I started the week after Christmas and ended up not finishing until January 10.  The stalk took me about an hour before I shot my buck at 56 yards while he was chasing a little buck off.  My buck gross scores 107 3/8.  It was a great year for me with my bow.  I was within shooting distance almost everyday I was out and can't wait to do it again next January. 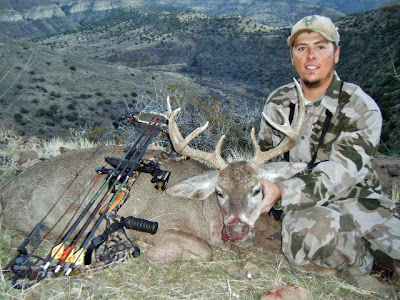 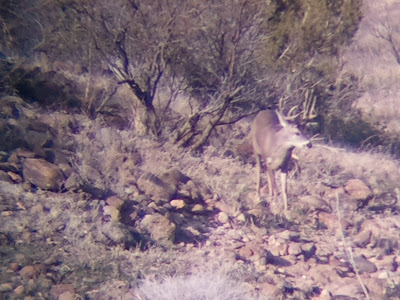 Posted by Devin Hancock at 9:37 AM No comments:

Callin Fox With My 2 Boys

Like my Dad said, "calling fox is great for kids".   I started taking both my boys out calling when they turned 2 years old.  Both have been on many fox calling trips with me and have seen many hit the dirt.  Its always exciting to watch them as a fox is about to run over the top of us and yell good shot daddy.  I love sharing the father and son bond with my boys in the outdoors as my dad did with me. 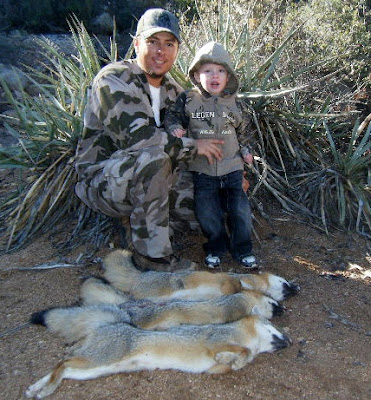 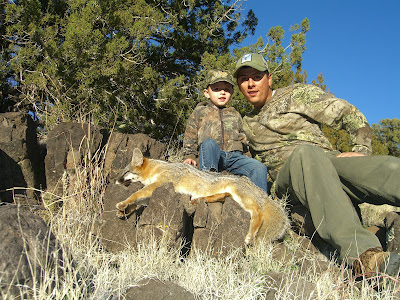 Posted by Devin Hancock at 8:11 PM No comments: