After not drawing a Strip tag for the 9th year now, some friends and I decided to pick up some leftover coues deer tags in southern AZ.  We chose a unit that none of us had been in to try and learn some new country.  Because no bonus points were burned and we knew nothing about the unit, it was pretty much an "anything with antlers" trip.

Our gang included myself, Richard Owens, Ben Williams, and Craig Blackburn.  Damon Hughes came along for the ride and was our hook-up for our sweet lodging.  We arrived late Wednesday night and scouted all day Thursday.  Then we hunted Friday and Saturday.  Here is a brief breakdown of each day.

Thursday Nov. 8 (scouting)
The weather was beautiful and we saw lots of deer.  Saw 10 bucks with two over 95".  Also had a mountain lion run across the road behind us.  No shots at the lion.

Friday Nov. 9 (opening day)
A storm moved in and it was miserable; windy and rainy.  Still managed to glass up one of our big bucks.  Craig missed him at 490 yards.  Didn't compensate for wind drift, shot wide left.  Fought weather all day.  I shot a buck about an hour before dark at just over 300 yards.

Saturday Nov. 10
Still fought weather; more wind and rain.  Craig and I saw some bucks and talked Ben and Richard into them.  Ben moved in and dropped the buck at 189 yards.  Later that evening, Richard and Craig found two bucks and Craig made good on a 160 yard opportunity. 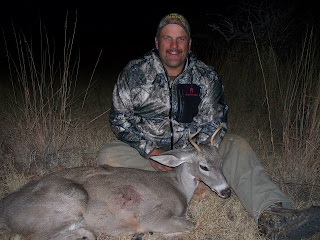 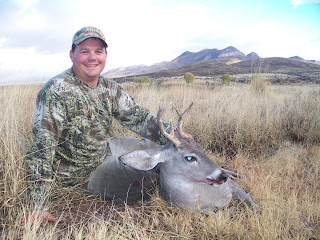 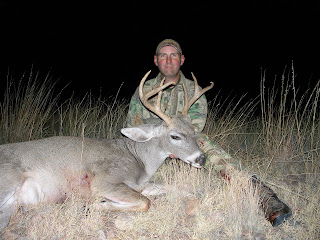 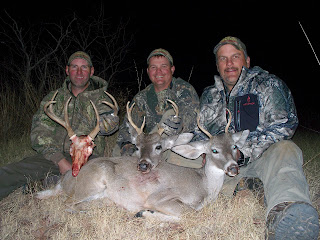 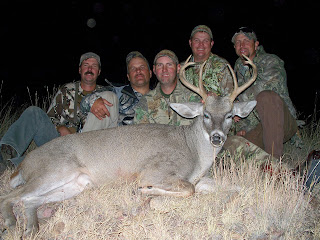 The Gang
L-R: Richard Owens, Craig Blackburn, Me, Ben Williams, Damon Hughes, & Eyeguards!!
﻿
Have I mentioned that I'm heading to Mexico in January to hunt coues???  Stay tuned!﻿
﻿
Posted by Daniel Franco at 4:01 PM No comments:

The 2012 late season found the BTO crew in Arizona hunting Unit 1 for late bull elk with new found friends Gary Walker of Booneville, Mississippi and his good friend Keith Phillips of Maryland, who came along to see Arizona and keep Gary awake for the long drive.

The opening day found us seeing a lot, and I mean a lot of elk. With Devin and Daniel seeing over 300 elk and Gary, Keith and myself seeing 150+ elk.  It was a great start to the hunt. We did put a play on two great bulls that Daniel watched go over a ridge but we ended up bumping into the bulls who had joined up with several other bulls for a noon day nap. Opening day came to a close with a lot of elk being seen and sore feet for some of us.

Day two brought unseasonably warm weather but again alot of elk were seen.  Devin and Daniel spotted one of our shooter bulls that we were able to bed, but around 10 AM all the elk were spooked by something on the ridge they were bedded on and they moved up and over the top not to be seen again. The highlight of the day two was when Gary, Keith and myself got to see up close and personal a collared Mexican Grey Wolf that we watched at less than 100 yards for more than 5 minutes. It was amazing to see how big of a predator these things really are. We also heard howling from camp one of the nights which was cool too.
﻿﻿
Day three found us chasing bugles, yes I said chasing bugles.  We heard bugling everyday on this hunt and this day was no different. We finally glassed one of the buglers with a group of cows and watched the bull until he bedded for the morning. We moved the group to within 358 yards and sized up the bull for Gary. With the bull getting up to reposition himself the decision was made to take the shot. Gary put an incredible 358 yd shot with a 20-25 mph crosswind and couldn't have put it in a better spot.

A big thanks to Gary and Keith for making the long drive out and congratulations on a great late season Arizona bull...
﻿﻿


Posted by Mike Hancock at 7:03 PM No comments:

We've all heard stories of people shooting the wrong animal.  Personally I've never been apart of such a mishap nor had it happen to me.  That is until this last deer season!  With the 3A/3C deer hunt winding down, a friend and myself set out to find a buck I had seen two weeks before while scouting.  I had hopes of taking this buck with one of our clients but had lost him due to all the pressure from the cow elk hunters.

Kent and I hunted for a couple of hours without a single deer sighting.  We moved locations and continued our search.  By 9 am we had located him!  He was with a small 3 point and almost a mile north of where I had last seen him.  While we prepared for the shot, the bucks decided to bed for the morning.  The big buck bedded in a jack pine thicket offering no shot.  At 256 yards we set up and waited for the buck to stand.  After almost an hour, the buck stood and began to bristle up and posture.  He walked away and into a small thicket and began raking on a tree.  Kent had to get out of his scope and adjust his rest and got back in his scope.  Kent immediately found a buck standing in the open and facing us.  Kent settled the cross-hairs and shot!

"Kent, you missed!" I exclaimed.  Suddenly I noticed a different buck running towards us with blood running down his side.  "Kent, you shot the wrong buck!!"

Those have got to be the worst words to hear when hunting.  Had I not witnessed it, I probably wouldn't believe it.  Better yet, I captured the whole thing on film.  The big buck apparently was displaying his dominance to the other buck as he approached.  When Kent took his eye off the buck and tried to relocate him in his scope, he found the other buck that was standing in the open.  When I get the video edited, I will post it.  It's sad, but priceless.

Luckily, Kent still managed to shoot a good buck considering it was the wrong buck. 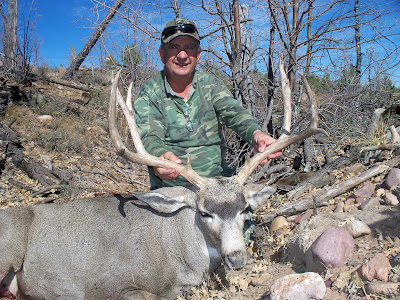 Kent with the wrong buck 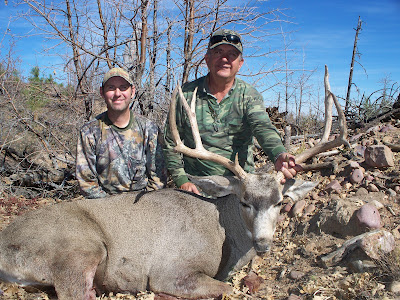 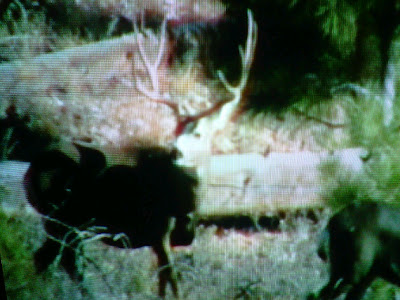 The one that got away.........
Sorry for the pic quality
Unfortunately for this buck, Kent's nephew had a Junior 3C deer tag and ended up killing this buck the next weekend.  Congratulations to Jace on such a great buck.  He should thank his Uncle Kent for unintentionally letting this buck walk! 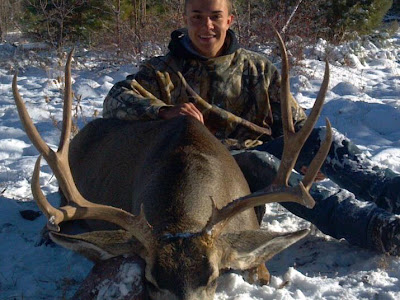 Jace Hall with the right buck