As the sun rose on Friday morning, reality slowly began to set in.  We still had 5 tags to fill and only two days left in Mexico.  Ira, Devin, Spenny, Rusty, Damon, and myself all decided to focus on the area where Ira and Devin had seen the 120" buck the previous evening.  Damon and I stayed half a mile to the south while the other four hiked to a hill directly above where the big buck was seen.  Within minutes, Spencer glassed him up.  Unfortunately, he had broke a couple inches off his G2 and G3 on his right side.  Ira quickly got set up and steadied for the 650 yard shot.  Suddenly a coyote spooked the buck and he ran into thick cover before Ira could fire a round.  They glassed all morning hoping that the buck would reappear.

Around  10:30am, shots came from the other side of the ranch.  The big mountain didn't allow for radio contact with Mike and Chase but someone was getting some trigger-time.  The rest of the morning was slow going.  Shortly after lunch, I glassed 4 bucks chasing a doe all over the mountain side.  Damon and I moved closer to size them up.  We relocated them and estimated the biggest buck at 95".  Despite his pretty frame, I was opting to pass the buck.  Following some deliberation, Damon talked some sense into me.  I shot my buck at 360 yards.  We reached my buck around 4pm and I was pleasantly surprised. 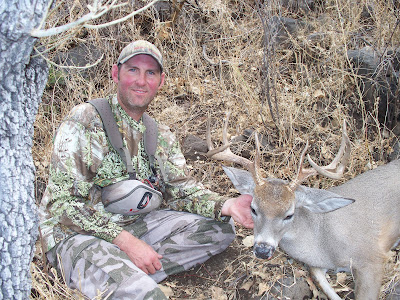 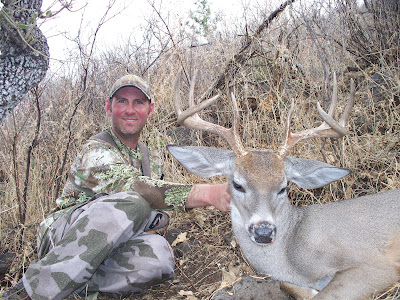 We packed up my buck and headed for the ranch house just as the sprinkles began.  At this same time, Rusty and Spencer glassed a good buck bedded about a mile away.  They ran to beat the darkness and to get a closer look.  Just before dark, they reached the area and found 4 bucks milling around some does.  They picked out the biggest buck and Rusty made good on a 520 yard shot from his cannon (30-378 Weatherby).  The buck was close to the far north boundary of our ranch and the boys didn't get back to the ranch house until close to midnight. 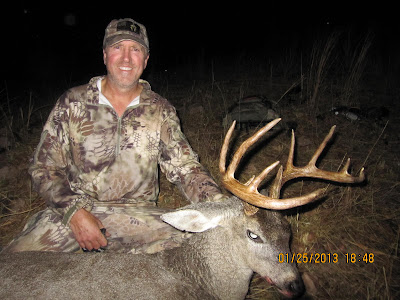 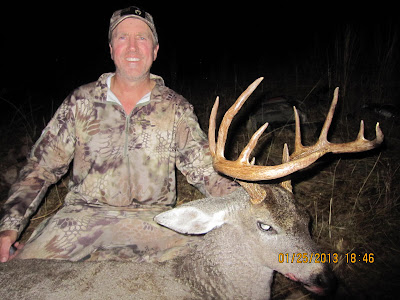 After Rusty and Spencer ran off the hill, Ira and Devin continued to glass for the giant buck.  They hadn't seen him since the coyote spooked him earlier that morning.  Just as they were getting ready to pack up and head off the hill, the 120" buck appeared.  The buck walked into a clearing at 325 yards and stopped behind a lone mesquite tree.  Ira got on the buck and waited for the buck to step out into the open.  The buck stood motionless behind the tree as the seconds turned to minutes.  Ira stayed in his scope until darkness consumed his sight.
To be continued........................
Posted by Daniel Franco at 7:52 PM