Sorry for the blitz in posts, but we're trying to get caught up.

This year we had the pleasure of hunting with Tim Allen of CA.  Tim drew a 4B Archery bull tag and was looking to cash in on his 3rd AZ bull with a bow.  It had been more than 10 years since I had personally guided in 4B. I can honestly say the unit is better than I remembered.  But it's still no 3C.

We located and chased bulls every day and saw some really good bulls.  We had some close calls early on and even a deflected arrow on the 5th morning on a dandy bull.  On the evening of day 6, we worked in on a cluster of 6 bulls.  The handful of cows kept the bulls occupied while we moved into the middle of the group.  Tim decided he wanted to have a bull called into bow range so Mike and Tim got setup by some trees and I moved back 40 yards and began calling.  Immediately a bull screamed and started moving our way.  The bull stepped into the open presenting Tim with an 18 yard shot.  Tim made two great shots to end the hunt. 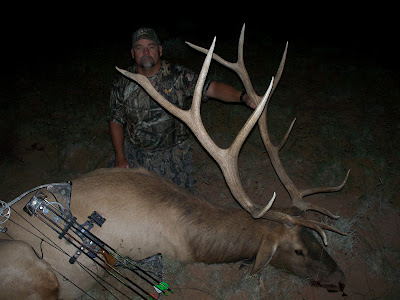 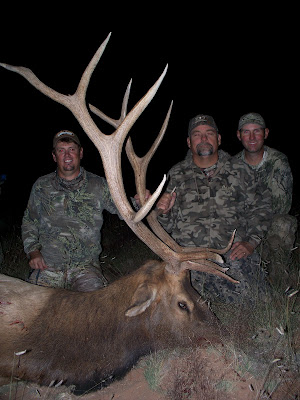 Congrats Tim on another AZ Archery Bull
﻿
With Tim's tag filled and a little bit of time to spare, I headed for 4A.  Damon Hughes was hunting with his brother, Eric, and had been experiencing the highs & lows of archery elk hunting.  Eric Hughes and I attended school together and I was hoping to have some time to try and help Eric fill his tag.
I showed up at camp at 4pm and gave Eric my pep talk.(brown it's down; hops it drops; flies it dies!)  Eric agreed and off we went.  Within the hour we had moved in on a good bull with cows.  Unfortunately the swirling winds foiled our plans and the chase was on.  We bounced from bugle to bugle trying to find a good candidate for Eric's tag.  With darkness falling, we approached a bugle that sounded promising.  The bull emerged and we noticed that he was missing his G4.  Eric decided that he didn't care and was ready to fill his tag.  Eric's 1st shot deflected off a branch and sliced the bull above his left eye.  Then Eric smoked him at 50 yards.  Congrats Haird!!!(school nickname) 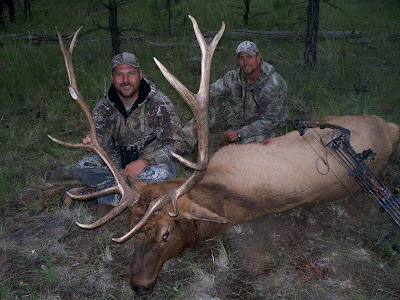 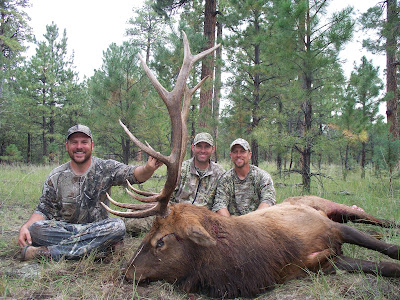