With the archery tags filled, we began scouting for our early rifle clients in units 3A/3C.  Rob Cox of Oregon has been applying with us since 2008 and finally drew with 18 points.  His brother Billy, who has hunted with us on two previous elk hunts, accompanied us on the hunt.  My father-in-law, Chester Crandell, lucked out and drew his 2nd early bull tag in 6 years.  I know what you're thinking and I agree; Sick and wrong!  Steve Ingersoll of Phoenix also got lucky when he drew with only 2 points.

Scouting was fast and furious.  Mike and Devin located the first big bull a week before the rifle hunt began.  He was an inline 7x7 with flattened G6 points that looked like crab pinchers on the ends of both main beams.  Because of this unique characteristic, we nicknamed this bull, "Lobster Claw".  Mike and Devin kept tabs on the bull and filmed him on two different occasions.

Just days before the rifle season, I found a bull and got a short video clip of what appeared to be a 350 type bull.  Upon further review, we noticed that the bull had triple eyeguards on his left horn and double G3's on his right horn.  This 7x7 bull got the nickname of "Triple Double".  These two 370 class bulls topped our hit list for 2012.

Rob and Billy arrived a day early.  We showed Rob the footage of the two bulls and told him to make the decision of which bull he wanted to pursue.  After much deliberation, Rob chose Lobster Claw.  Opening day had us scattered all over the unit.  But there were no shots on day one.

On the second morning, Chester, myself, and Damon Hughes(cameraman) were hot on the trail of the Triple Double.  Just when I thought our morning hunt was over, the bull made a fatal mistake.  He left the thick cover to check another batch of cows still feeding in the burn.  We quickly positioned ourselves between the bull and the thick trees.  Triple Double singled out a cow and headed our way.  Chester made a perfect 200 yard shot and Damon captured it all on video. 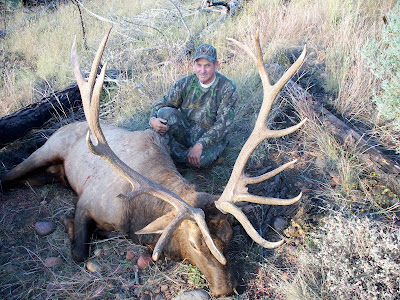 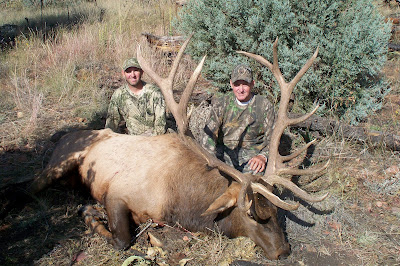 Congrats Dad-in-law
On the third morning, Rob, Mike, Billy and Jay Scott(cameraman) also got the break they had been patiently waiting for.  Lobster Claw had finally stayed out feeding on some open points long enough for Rob to take advantage of.  Rob made a couple of well placed shots at 275 yards.  Jay also captured the entire hunt on film. 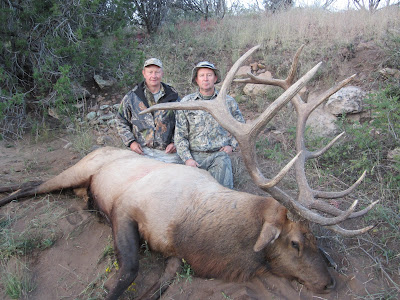 The Cox brothers with an AZ trophy 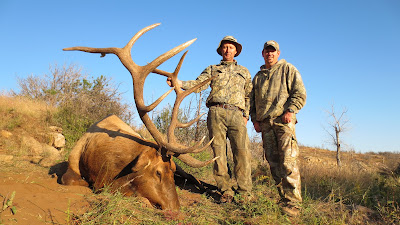 Rob and Mike with Lobster Claw
By the third evening, Steve, Devin, Bill Rimsza, and myself we're covered up in bulls.  After passing on over a dozen bulls that night, we decided to start heading for the truck(2 miles away).  Suddenly a bull appeared out of the trees and enticed us into taking a closer look.  We gave a quick assessment of the bull and put Steve in the scope.  Steve took the 140 yard shot and dropped the unique bull in his tracks. 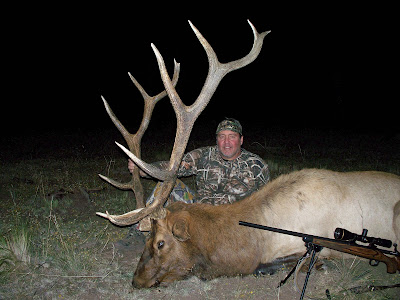 Steve with his 1st AZ bull 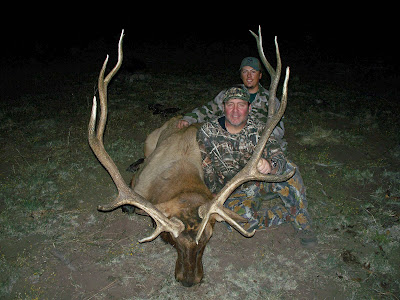 Steve and Devin
﻿
A BIG THANKS to Jay Scott and Damon Hughes for coming along and filming our hunts.  Jay has also made it possible for both Rob's and Chester's hunts to be aired on next Thursdays (Oct. 18) Cabelas Out West web show.  We will post the show link here on our blog next week when it's available.
Posted by Daniel Franco at 10:28 AM