We started out the year the second weekend of January hunting pigs in unit 23 in a familiar area.  We split up with Dane and myself glassing to the west while Mike and Uncle Chase Sherwood were moving up the wash glassing to the north.  It wasnt long when Dane whispered to me that he had pigs.  They were 700 yards to the west on the other side of the wash chasing each other in the sun.  We called my dad and Chase to let them know that we were taking off to the stalk the group of pigs. We stalked up to 50 yards and waited for the best shot oppurtunity.  After 5 minutes we had a pig walk out in the open and Dane drew as I ranged him at 55 yards.  Dane released an arrow that stuck the pig perfect.  The Pig jumped and kicked like a deer.  We waited for my dad and Chase to make their way down to us for the recovery.  We walked up to where the pig stood and instantly had a good blood trail, the pig only made it 20 yards and was laying under a mesquite tree.  The hunt was over by 9 A.M. and had us sitting at the Butcher Hook in Tonto Basin by lunch. 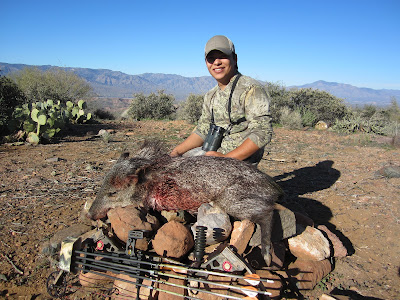 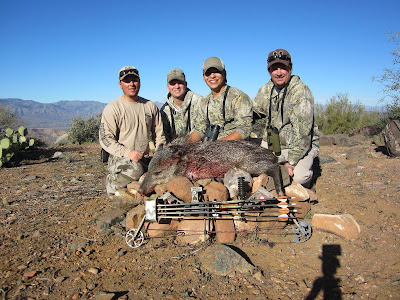 Posted by Devin Hancock at 1:32 PM